I’m a professional keynote speaker. (There, I said it.)

I don’t tell everyone my line of work, but there are situations where it can come in handy. For instance, sitting next to an overly chatty seatmate on a plane, “I’m a professional keynote speaker” works almost as well as “I’m a recruiter for a cult” to shut down discussion in a flash.

In my case, here’s what being a professional keynote speaker means.  I speak about the customer experience, building a customer-centric corporate culture, and related topics to about 35 industry conferences a year: throughout the U.S. and around the world.

And while this seems normal to me, the concept of a professional keynote speaker is mystifying to some people.  So this will be a little article to start explaining what’s involved, to anyone who is interested.

Professional keynote speaking is similar to modeling, except for the dietary restrictions: It’s something that looks easy, almost not like a professional activity at all. Which I guess is why those of us who make our living as keynote speakers tend to be invested in making sure you understand that doing this is harder than it looks. 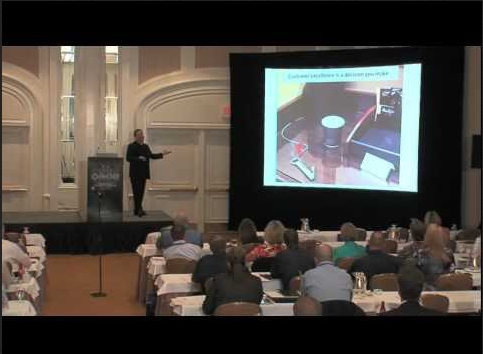 Being a professional keynote speaker is indeed hard work (if you’re doing it right). But it’s not digging ditches. Most of what makes professional speaking strenuous consists of tasks that are intellectually and psychologically enjoyable:

1 Research: Giving a keynote requires that you know a thing or two about your subject, and your audience. And doing this research is, to me, a pleasure.

2 Writing: You can be a walking encyclopedia, but that’s not enough: Your speech isn’t going to write itself out of your vast store of knowledge. It needs crafting and editing, and more crafting and editing, before it’s reasonable to ask people to invest an hour or so to listening to you.

3 Rehearsal: no way around this one. (The only dissenting voice I have heard on this? Seth Godin, whom I adore, wrote a controversial piece on the danger of rehearsing too much. To which I would say: Sure, you don’t have to rehearse all that much if you are Seth Godin. Mere mortals, it’s hard to think of us crossing the too-much-rehearsal line very easily.)

First, the traveling. Traveling is hard on the joints and the waistline. But it’s not like we’re traveling in steerage on a steamship. I don’t find it worth whining about, most of the time.

Second, the fear of being onstage. While I’ve never died (at least not offstage) and thus can’t offer a direct comparison for you, I do know the oft-quoted “fact” that public speaking is scarier than death is a big, fat slice of baloney. No poll has ever shown that Americans are more scared of public speaking than they are of death.

The closer comparison in that survey was to spider bites, if I recall correctly. In my case, I’d rather be onstage than bitten by a spider. Though, sometimes, being onstage does feel like being bitten by a spider. You get a little jumpy, and you have itches you can’t scratch. Beyond that, I don’t think it’s all that scary.

And that will be my last pointer for today: If you want to be a professional speaker, don’t forget your pants. It’s unprofessional.

Micah Solomon • Helping you enchant the customer of today.

“One of the very few keynote speakers who are enjoyable and informative at the same time.” – Eric Kline, The Payroll Group Conference
“Bring Micah to your organization to hear what he has to say. It will change your business. He has written the book on customer service, literally. ” – Jon Mueller, 800-CEO-READ

Keynote speaker, author, customer service speaker and customer experience consultant Micah Solomon (that’s me) is pleased to bring you this blog: College of the Customer. If you’ve looking for information on speaking and consulting, as well as videos, articles, and other resources, go here.